I Survived the House of Night Apocalypse 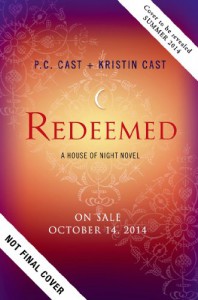 PC and Kristin Cast really out do themselves when it comes from being disgusting .  Thankfully, after Redeemed I’ll never have to read a House of Night book by them again.

No, I’m not even going to talk about possible spinoffs.  So, we’re going to forget about that.  Right now.  Not even going to give the Casts that idea.  Though, I’m sure the thought has already occurred in their offensive heads.

After writing twelve (if we count the graphic novel) of the drinking game things-though I really have never drank a drop of the devil’s drink when reading this since I care for my liver- it’s sort of hard to come up with something truly original, so today I thought I’d just look back and reflect (cue the bad montage music)

Reflection One: I knew going in it was going to be painful beginning this torturous journey.

I wasn’t a complete innocent.  I had tried reading Marked after the ill guised recommendation of a now defunct Walden Books salesperson.  I was vampire hungry back then and apparently the salesclerk viewed Zoey as a strong heroine akin to a Meg Cabot heroine.

I think she got this series confused with Vampire Academy.

There is nothing about Zoey that is strong unless we count her Mary Sue powers which I don’t.  She hasn’t even evolved as a character.  The last book makes this painfully obvious with her jail house scenes.

I will say I have matured though.  A year ago, I would’ve been spitting and spewing about how the Casts only research into the criminal justice system consisted of Law and Order and then went on a big fuckery rant but not so much now.

And it’s not because of my blood pressure, it’s because the whole scenario was so typical Casts.  I expected fuckery and I got it.  Never mind the following:

Crickets can be heard in the background of the review.

Obviously, you haven’t read that much House of Night.

Reflection Two: Neferet has never really been a true villainess.

The sad truth of the matter is that Neferet could’ve been an interesting characters.  And I really do think YA needs good villains.  But in the end, she’s a joke.

At least she was clothed this installment.

The problem with this character is I feel like she’s sort of a parody at best and a bad parody.  This character had the skeletal outline to have lots of layers.  Those layers were never developed though.  Rather, I think everything this character endured (abuse, rape, etc.) was just sort of thrown to the side.

I really thin the end gave her no justice too.

Her downfall was so easy it was ridiculous.

And I’m not even going to discuss how the Casts couldn’t come up with something original because that would be pointless.

Reflection Three: This book exemplified how pointless the love interests all in this book or really any other character besides Zoey Redbird.

The thing about series finales is they should be a goodbye from all the characters.  This book really was only about Zoey and some new unknown characters.

Rather, than getting mad about the new characters, I tried to ignore them and focus on the characters I know and hate…but I couldn’t because guess what they barely appeared in this story other than to provide a pep talk to Zoey and  help out in a Captain Planet ritual.

Yeah, I watch that show way too much in my youth.

But it’s the only thing I can think of when I think of Zoey’s friends because they have no personality especially in the later books.

Even the love interests–who were the most fleshed out of the supporting characters had little to no personality in this installment as well.

It was Zoey.  Zoey.  Grandma Fucking Redbird (yeah, I had to leave the fuck in her middle name), and maybe just maybe Neferet.

Oh, wait there were some new characters.

A cop who liked to curse and…some lame mortal that was Neferet’s play thing.

All I can say is this again: I don’t care.

Reflection Four: The Casts just like to offend people.

I used to think that the Casts unintentionally offend people.  However, I am much wiser after the seventh or whenever they mocked people for being offended about the r word the first time.

They do that again here.  And also mock those of us who drank ourselves to death due to the word bullpoopie being used instead of fucked.  And they said fuck a lot themselves.

Don’t believe me look at this fucking disgusting quote from the book.  I’ll start it when Aphrodite is talking about interracial romances-comparing it to Scandal of all things:

“they’re reminds me of Olivia and the president in Scandal.  I’m liking this whole black girl-white boy thing.  It’s attractive.  Not to mention how it broadens the typical white boy point of view.  Goddess knows they need it.”

‘That’s the most politically correct thing I’ve ever heard you say.”

My interpretation of the text is that they are directly addressing heir reading.  It’s pretty obvious, well in the earlier installments, less obvious here.  But still.  If you knew about the whole r word incident, you’d know about this.   Honestly, I’m sort of over it.   It isn’t funny.  It’s disgusting.  Maybe the Casts aren’t offended by the r word but  there are a lot of people who are.  And chances are some of them are going to read this book.  Isolating your audience isn’t just rude, but it’s bad economic sense.

Reflection Five: How the fuck did this get nominated for two Book Shimmy awards?

Yeah, this is where you see me get mega pissed.

This is a bad book.

And I’m not just talking about it’s actual content.  Technically it is a flop if there ever was one.

The multiple points of view does not work.  I think the Casts would’ve been better off having this book just be written in omniscient third than the first and various limited third it just got confusing after awhile especially since the changes in point of view would happen so quickly. Seriously, half a page of view point changing was excessive.

The plot was illy paced.  I hated how everything was resolved it just seemed way too easy and as if little thought was done.  The ending itself was expected and it had one of those epilogues that just reeked awfulness.

Yet, it was nominated for two catagories-one best book and the other best villain.

Well, people have elected the tea party to office so I guess it makes sense.

The good news though is I’m done.  I pray the Casts won’t try to revive this like many other of their YA counterparts did to their series.  This series needs to die.