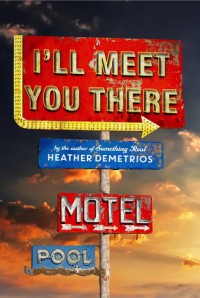 Most of the characters in YA are rich are upper middle class, it was sort of refreshing about reading about a main character who couldn’t afford a BMW or for that matter barely afford college.  A majority of reader’s have money issues and while I sometimes read books to get away, it is sometimes nice to see a book focus on an aspect of life that doesn’t get that much attention.

I also liked that Demetrios handled this subject matter with dignity, where it did seem realistic.  A lot of time with books that focus on social poverty issues, stereotypes are focused on.  However, even though we had characters who failed into the so called stereotypes of poor communities (teen mothers and double wide trailers) Demetrios fleshes them out to where they are actual characters.

I found Skyler’s struggles to be  relatable.  The ending also was fairly realistic, though I do see trouble ahead for a certain character in the future.

I also was really happy with how Josh’s story was handled.  Demetrios’s treated the subject matter with dignity, and rather having Josh’s story sound cliche she adds layers to it that makes it truly unique.

As far as plot goes, there’s really not that much plot to I’ll Meet You There.  It’s more of a character piece than anything else. While there is some sense of a plot, it’s more or less the characters dealing with their inward demons.

There was one particular scene in the book that bothered me and that was because it seemed like a lot of melodrama more than anything else and made me disrespect a certain character.

This is just a personal thing for me, but DWI is an automatic best friend x-nay for me for book characters.  It also really didn’t fit in with what I knew about this character either, I would’ve thought given their background they would’ve been vehemently opposed to doing just a thing.

The pacing is slow (it probably would’ve been okay with fifty or so pages chopped off), but it does immerse the reader into the character’s world.  The details that Demetrios’s uses throughout the characters’s descriptions really adds character to Creek View to the point where the town itself is almost a character in the book.

I’ll Meet You There is one of the more thought provoking YA books I’ve read in the recent past.  It isn’t light and fluffy, there isn’t any complex world building, but what it does have to offer is gritty realism.

Overall Rating: A- very good.  There were some scenes that didn’t work for me and the pacing was a bit off.  But overall, a worthwhile read.