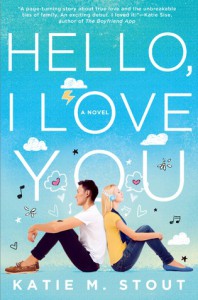 To be honest, the review pre-release  of Hello, I Love You hadn’t been great, BUT I decided to give it an honest try anyway since my knowledge on Korea is very low.

The result.  It wasn’t as bad (to me at least) as the reviews were making it out to be, but it wasn’t great.

The writing itself is engaging enough.  I breezed through this thing maybe in three hours if I didn’t have mandatory real life breaks.  And I did like the love interest and the supporting characters that were developed in this book.

She was insufferable.  And while an insufferable character can work if she’s developed into someone relatable throughout the book, Grace wasn’t.

She is obnoxious.  She stereotypes and generalizes everything about South Korea.  And doesn’t learn from anything.  In fact, the only person worse than her on being an obnoxious tourist is that chick whose main focus in Europe was getting a Big Mac.  Okay, maybe in the last fifth of the book when Grace states she was a horrible person but five pages later her bad behavior pops up again.  Even the fact that her mother is a worse person than her and emotionally abuses her doesn’t make me warm up to this close minded character.

And that’s why the romance really didn’t work for me, because I didn’t know why a guy as nice as Jason would be attracted to such a shrew.

Grace aside, I was really underwhelmed by this book.  Aside from a couple of mentions of Korean food and a brief mention of what K-Pop and K-Dramas are there was no exploration here.  I really think the one other Korea book-Gilded-did a better job describing the country than this one and that’s saying something.

A part of this might’ve been because in its original draft, the book was set in China.  So maybe Stout found it hard to incorporate Korea into the book because she originally used Chinese landmarks or experiences that just didn’t fit. Because most of the Korea we saw was at the school or in the mall.  But at the same time, and this is the huge but, I felt a lot of things about the book were treated like the usage of the setting-it was underdeveloped.

And I felt like this book tried way too hard to be Anna and the French Kiss.

Book, don’t try to be something you aren’t. It will be less painful.

There were several scenes in this book that made me give the book the old side eye with it trying so blatantly but failing at being Anna and the French Kiss.  Here are a few examples:

Of course there’s more to it than that, but at least with Anna you felt the characters, felt them go through the motions.  With Hello, I Love You you didn’t get the characters at the level you got them in the former book.  While I did get some idea of who Grace and Jason were at the best it was only done on a shallow level.

The same goes with the musical aspect as well.  We keep hearing how great and talented Grace is with music, but I didn’t see any examples of her mad skills other than the fact that she has pretty elitist taste when it comes to music.  I don’t even know if she can read music, so I don’t consider her a prodigy.

The big dramatic reveal of the plot, sort of seemed out of place since there was really no build up.  To be honest, a lot of the stuff in this book felt out of place.  Because no build up.  Which is a shame because there were a lot of things about this one that could’ve made for an interesting and fun read.

I hope Katie M Stout’s books will improve.  I really liked the concept of this one, and to be fair if you ignored Grace’s bigotry and bitchiness there were a few glimmers of hope here and there.  But overall, this book just didn’t work.