In Which I Want Suze's Wardrobe 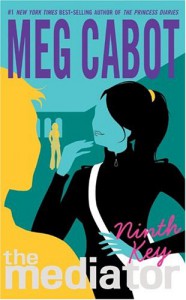 I read this in a binge read when I finally got my hands on the rest of the series-I had read books five and then later four first BEFORE finally reading books one, two, and three.

Honestly, I just wanted to get on with this one and get to the last book because I had to know how my ship was going to work out.  Because it just had to because surely Meg wouldn’t be that cruel…

Anyway, what I remembered the most about Ninth Key was Suze’s fashion choices-

Armani sweater seat, Batgirl boots, and Betsey Johnson miniskirt.  That outfit was imprinted on my brain.

And I kept thinking about it since.  Or at least that’s the outfit I always associated Suze with besides the plethora of slip dresses that she wore in the fourth book.

Funny, how this series became a lot of my fashion inspiration at the time.  No Cosmo for me, but Mediator.

Ninth Key to me was always the forgotten book in the series.  A lot of people say that about Reunion, but I actually like Reunion more or remember liking Reunion more-I think it Sleepy and Gina that made that one better than it really is.

I so ship them.  Despite the fact that Gina deserves someone a lot more responsible than Sleepy.

Okay, all kidding aside, Ninth Key isn’t bad, it’s just not that remarkable.

Well, the climax scenes were well done and hilarious, but besides them this book was  a particular slow book.  I have to give it Meg though for slowly developing the relationship between Suze and Jesse.  I really do love a good slow burn romance, and this is what this one is.  It’s such a arare thing in YA, so excuse me while I sort of relish in it.

However, I don’t think there was really any growth between them in this installment other than Suze acknowledges that Jesse is hot, and Jesse interrupts a very awkward date with Tad.

But we all knew it was never going to last with Tad.  I’m sure he found himself a nice boyfriend when he moved to San Francisco, just saying.  Honestly, Bryce and Suze were more believable and that’s pushing it.

It’s odd how it takes Paul Slater, who is basically a sociopath, to actually be the one love interest that potentially can match Jesse and that’s mostly in fannon.  Because Paul in cannon is sort of jerk, but he’s not in this book so we can’t talk about him.

Most of the development to the overall series was done of the ancillary relationships-family and friends-which was nice.  As I said before, it’s a filler book, but it does a good job showing how blended families relate to each other so that was good.

And I liked how we got to see a bit more of Adam and CeeCee in this installment, though I did feel like they were used a bit by Suze.

Overall though, Ninth Key is a good quick read.  It’s never going to have the same impact on me like other installments, but it doesn’t damper the series.