Decent Use of the Second Chances Trope 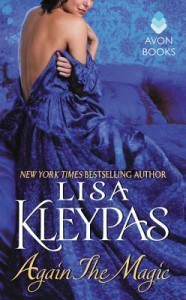 feel like if I hadn’t read Judith McNaught’s Paradise, I would’ve enjoyed this one much more.  Paradise is a contemporary that covers many of the same things that Again With the Magic did, except in my humble opinion better.

Again With the Magic isn’t a bad book.  I managed to finish it within like four hours.  That’s not bad at all.  Especially since I was very tired and I could’ve been doing other things like shopping online for my two new Chihuahuas.  However, it just didn’t live up to what I wanted.

One of the things I really like about the second chance romance trope is that you get to explore the characters at different points in their lives.  I felt like the “before” period was a bit rushed here and we were told not shown more or less McKenna and Aline’s romance.

Not that McKenna and Aline are that bad of characters, I just didn’t really feel like I “got” them.  Maybe this was in part that this book heavily featured a side romance with Aline’s sister and McKenna’s business partner.

The side romance was cute BUT…

I think it hindered my enjoyment of McKenna and Aline, who by all accounts should’ve been fascinating characters to explore.

First you have McKenna, who’s origins are kind of murky and honestly never get explored as much as I liked.  With Aline, something terrible happens to her, but it really doesn’t effect her life in a way that she has too much difficulty.  When she should.

Oh, yes, she didn’t marry…but what happened to her should’ve had more effect than what it did.

While I didn’t get to know the main characters as much I liked, I did think Kleypas did do an excellent job with depicting the side characters.  Save for one very, very, minor characters all of these characters showed many quirks and facets.

The plot here was fairly boring.  There wasn’t really anything driving it, but angst.  And angst can get very tiring after awhile.  And I think a part of me kept reading it because I wanted something more to happen.

If you like second chance romances that take place in the Victorian era this is probably a fairly solid one to read, but nothing extraordinary special.  It did make me want to revisit Paradise though.