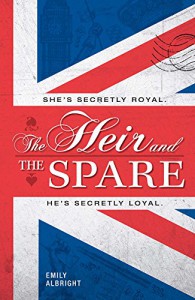 Warning: To all anglophiles ignore the brilliant looking cover.  And carry on and watch something on Acorn (might I recommend Doc Martin).   Or if you like British “royalty” stories just watch What a Girl Wants.  And now I turn the blogging over to my dearest sweetest coblogger, Patricia Cake Beagle.

A new year and a new book for me to review.

How was your Christmas?

Mine sucked all I got were a lot of Christmas bows tied around my neck while the yappy Chihuahas and terriers got a Bark Box subscription.

I still don’t get why I have to review the sucky books.  I should be reviewing something fun like that Lucy the Beagle series-though it should’ve been called Patty the Beagle because that would’ve been a lot more interesting.  I mean, I know my life isn’t as interesting as certain Beagle Youtube starrs (come on, MJ, get me a ball pit already you know it would be spectacular), but I deserve better than this book.

It is a travesty to my Beagley English heritage.

The premises looks exciting.  I mean, it’s something I can relate too.  Finding out that you have this wonderfully spectacular hidden legacy that is so me.

And yeah, it hasn’t technically been revealed that I’m related to Uno or Ms. P but it’s bond to happen one day.  Much like little Miss Evie found out she’s related to a duchess.

Note, my name used to be Duchess  before MJ’s mom changed it.  She said it made me sound like I worked at a brothel in one of the Catherine Coulter books that she used to read in the old west.

You’re probably seeing a pattern of digression in this review, it’s because this book was so boring and just poorly written. Basically it can be summed up like this: Evie falls in love with a Prince Harry wannabe-who’s hair in blonde and lacks personality.  And, oh yeah, she might be related to British royalty.

The thought that she might be closely related to Eddie never pops in her mind.  Obviously, someone needs to get their AKC papers-or would it be UKC since she’s in the UK in this book-and have them checked before they do any breeding.

The point is this is a book that focuses on how the girl gets the guy, even though Edmund slobbers over her for most of the book and has a personality like a stoned Chow Chow.

Seriously, he’s not that big of a catch.  Not like my current crush who is king of his dog park.  And has his very own ball pit.

I bet Eddie doesn’t have his own ball pit.

To be fair, Evie, doesn’t have much of a personality either.  For a character that is supposedly smart enough to get into Oxford-as a transfer undergrad for that matter-she should be a walking brain.  But instead, she acts like one of those girls on I want to Marry Harry.

Can I have a Milkbone and go back to sleep now?

Apparently not.   This reviewed has been deemed “insufficient” by my ingrate of an owner.  I am supposed to talk about how arcane the book is when it comes to women and womens’ relationships with each other.  Because apparently, the main character likes to insult other women about their boobs.  Having boobs=evil.  Which doesn’t make sense to me because doesn’t the main character have boobs?

I am so confused now.

I am also to discuss the lack of research about Britain their education system, and how the aristocracy works.  But whatever.

Long story short, don’t read this if you actually care about this sort of stuff.  It is a nice decorative book though, so that has to count for something.  Right?