A Robin Hood With a Douchey Accent 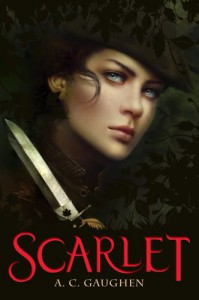 Robin Hood is one of those poor figures that keeps getting ripped into shreds in various forms of multi-media.  Personally, I blame the fact he looks good in tights.  Guys who looked good in tights are basically destined to have themselves torn up in remakes and spinoffs.  Plus, he was considered to be hot in animated form-as a fox.  If people are finding his animal form hot then obviously that’s something to cash out on, right?

I’ll admit, I have fallen under Robin’s charm-that fox has it going on.  And when I found out that AC Gaugher had a Robin Hood retelling where Robin’s love interest is actually kick ass than chastity belt wearing, I had to give it a try.  However, I was not impressed.

Scarlet wasn’t completely odious though.  Bad it was.  But I didn’t outright hate this book.  I appreciated what it was trying to do.  I liked the idea behind it.  Having Robin’s love interest really be a girl in the disguise as Will Scarlet was pretty awesome.  However, Scarlet herself….

Oh God.  She’s one of those characters.

Yes, occasionally Scarlet can do something useful, but more often than not she needs saving.  And you’d think after being hit by an arrow or cut up that would make you immobile for a few days.  But nope, Scarlet heals faster than Superman.

And I could get over that because it’s Robin Hood, but it’s not Robin Hood that’s talking, it’s Scarlet and she has to have one of the most annoying mouths ever.

Before I start this rant, I’ll mention that I’m actually being nice here.  I haven’t gone into details about the historical inaccurcies about this book.  I sort of took it in with History Channel mentality.  I didn’t expect anything really to be remotely educational or historically accurate, but I did expect a good story.  However,  the way Scarlet was characterized just made me want to vomit.

The I’m a tough girl act got old fast.  Add her thoughts on romance in this book and the bad fake “poor” accent and I wanted to deck her.  Multiple times.  I get what Gaugher was trying to do with this character, modernize and update upon the traditional leading lady in Robin Hood.  Which should’ve been done, but the way this was executed just made the book flop.  Scarlet was just intolerable.  I kept hearing about how she could throw  knives one minute, and the next Robin would be protecting her from her own stupidity.

Speaking of Robin and Little John, and for that matter any other character with a penis in this book seemed to have it bad for our special moon eyed herorine-oh yeah, the unusual eye cliche was used (seriously, I thought that was something only fan fic writers used).  Even the bad guy has the hots for her, or at least wants to mary her even though he says he’s repulsed by her.

And the sad thing is, I didn’t like not one of those guys that were throwing themselves at her.  Little John was an ass.  Robin seemed okay till he saw Scarlet kiss Little John then called her a ho.  And the bad guy was just…well, disgusting.

Really, how can you make Robin Hood not sexy?  That is like the ultimate sin.  I mean, even Disney made him sexy and he was a talking animal.  People shouldn’t like talking animated animals, but there was just something about that damn fox that made him…well, a fox.

This Robin Hood though….well, let’s say that he has the personality of a wet noodle.

That’s right a wet noodle.  All I know about him besides his soft wheat color hair (and yes, that’s taken out of the actual book) and storm/cloud colored eyes that he found Scarlet and that she has feelings for him.  He doesn’t really do anything until Scarlet starts to get it on with John and then he’s like you whore.

I almost laughed when Robin said this.  When I wasn’t disgusted.  I mean, really?  Really?  Who says that.  Well, assholes that’s who but….

This is our leading man and Robin Hood at that.

I somehow was able to get passed all of this though and continue the rest of the book, but I found it to be lackluster and disappointing.  Conveniently Scarlet’s asshole Robin gets captured and she has to make a sacrifice that is similar to something you’d see on General Hospital.  It really was lame.