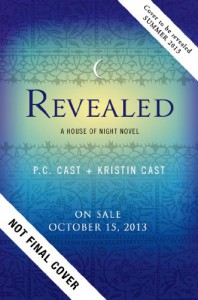 I have no self control.  I know House of Night year was 2013, but this one was mocking me at the library and I just had to read it.  I really don’t know why my library’s YA librarian has to pick out such rancid choices in reading for the youth in my community.  I really want to sit down and discuss some of these feature read choices she makes.  But I won’t.  I don’t want to get banned from there and quite frankly her choices are usually pretty good if you want to get tanked.

I don’t drink though when I do House of Night drinking games.  I like my liver too much and I found that the latest books are even worse than the previous ones, so getting polluted isn’t the smartest thing to do.  That being said if you wanted to get drunk on this book it wouldn’t be that difficult.

You know with a series this long, it gets difficult to know how to review each book.  So, I decided that for this particular review I”d try to theorize why this particular book is so bad.  I think that’s a valid review.  And I thought if you really wanted to have a drinking game to this installment you could take a drink every time the text is geared towards one of the following theories:

1)The Casts are treating the series as a drinking game themselves:

I seriously had to wonder if the Casts were drunk when they wrote this.  A lot of the nonsense I read almost read like it was an inside joke of sorts.

Of course, being me being the conspiracy theorist I am (seriously, I think H2 needs to give me a show about deciphering the Casts, it would be much more interesting than that lame America Unearthed) I started believing that there was some sort of drinking game going on here.

It seemed almost as if they’d give themselves points for every time they randomly mentioned brown pop.  Every time Neferet walked around randomly naked or anytime Zoey gets told how special she is.  Having the random Captain Planet ritual also helps.

Being formulaic  doesn’t automatically equal terrible, but in the case of the House of Night it does.  I really don’t care that Zoey is obsessed with soda but never calls it by its real name, that Neferet is an exhibitionist, or that Zoey is the ultimate Mary Sue.  I guess I should be happy there wasn’t a regulation vocabulary lesson in this book…

You actually barely even noticed Damien’s existence in this one.

Really, most of the original cast is gone.  Save for Zoey and Stevie Rae and one of the twins.  But everyone else. Poof.  Prince Eric doesn’t even get a mer mention in this one (guess he finally found Ariel-took him long enough).  Even though a lot of these classic HON tropes were still in there, this book really did feel off. I just don’t know how to explain it. Anyway, I’m going to list some classic HON tropes below that support said theory:

2) The Casts are seeing how much they can get away with while fulfilling their contract:

As I said previously, this HON book lacked heart.  And to be honest this isn’t the first book in the series that has been like this.  It’s been a steady decline since the fourth of fifth book, but there was something about this one that really seemed to me like the Casts gave up.

I blame a lot of it on abrupt pacing.  As I’ll mention in theory five there were a lot of moments that felt fake because of the nature they were written.  Instead of digging deeper into scenes, I just felt they were barely scraped by.  It really didn’t work and made the book feel sloppy.

A part of me wants to pacify the Casts and say that just planned too much for one series, but the thing about this series is that eighty-five percent of the books are nothing.  It really seems like they want to write another book so they can get another advance.  I’m not entirely blaming them, it’s good business sense, but why not move on to a new series.  This horse has been beaten way too many times.

Honestly, if you drank to this series expect to wake up in a hospital room.  As I said before I do not recommend alcohol if you want to play this game.

3) The Casts believe they’re edgy and/or are pushing a message:

This is an interesting thought.

But what’s the fucking message.  I ask this because this series really has a dual personality sometimes its trying to be grossly immature borderline elementary  and sometimes it’s just being nasty to the extreme.  I decided to pull out two sections that I’ll use to illustrate this:

Appealing to the Kiddos:

'I went to he drink bar and filled up my glass of brown pop-fully leaded- with caffeine -calling back to him, ‘Not six-nine..  That’s when I made up the psaghetti madness song.’ I cleared my throat and launched into  ’Pa-sghe-ti, pa-sghe-ti’ and even did the psaghetti dance the way to the booth. (63)

For the X Rated Crowd:

Do you see why I’m perplexed?  I really don’t get it.  I have tried from book to book, but they just keep getting stranger and stranger.  Especially with Neferet.  I honestly skip over her section now because she is a pathetic villain who the Casts try to demonize her by sexualizing her which really just has me rolling my eyes.  But then again what do expect by someone who writes this:

‘So you’re used to scaring human girls into giving you some cash?’ What total jerks!

The second guy shrugged. ‘If a girl don’t want to be scared she shouldn’t be out here alone.’ (291)

4) The Casts actually have a target audience that these books works for:

I really don’t know who the target audience is.

Do I know who reads these books?

Yeah, I sort of do.  More often than not readers started the series when they were young and naive and kept reading them as a guilty pleasure series. Many of them though, eventually gave up on the series or some continued it for the pure snark value like I do.  I really dont’ know anyone who read them because they find the books to be genuinely good, though I’m sure there are some people out there that find them to be quality books.

And that’s fine.  That’s their prerogative.  You can’t judge them for that, much like they can’t judge me for hating them.  Everyone is entitled to their opinion.  But based on the series here’s what I think this sort of person would be:

5) The Casts have been replaced by an eight year old ghost writer of alien origin:

This theory is probably the most logical one I’ve come up with yet.  It would explain how the prose has deteriorated to the quality it is now where  a psaghetti song is a running gag.

I kid you not.

Need another example.  A murder which should’ve effected one of the main characters, is dramatically trivialized to the point you almost think you’re reading a bad fan fic. Human emotions in this story do not ring true.  Of course, you could make the argument that they’re not humans.  But that’s only true for about 3/4 of the text.

It honestly shouldn’t surprise me.  Big emotional events have always been trivialized in this series.  Remember when Zoey got caught with Professor Skeeze by Prince Eric?  The reaction was cartoonish then.  You could say the same thing about the various times Neferet has walked around naked, or the multiple times that old biddy Redbird almost died, or for that matter the “Defying Gravity”  swan song.  The Casts just can’t do emotion.

Really, this book is shiteous.  The thing is, I’m perfectly fine with that.  I don’t read HON to expect quality I expect snark.  But the snark value, sadly, is disappearing