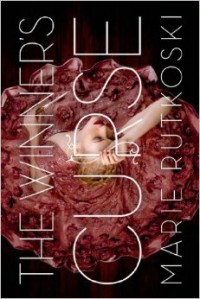 The publishing gods did decide to grace me with The Winner’s Curse (personally, I think they were trying up for the abomination that was Defy).

This is everything you could want in a book.  Interesting plot, well developed romance, a cliff hanger that drives you crazy in a good way…

So yeah, this review is going to be a bit of a fan girl review because I can’t help but gush over this one.

And I never gush.

But I will be gushing here.

I think I will start with discussing what I loved the most about this one.  The characters.  Both leads were well develop.  You hated them at some points of the book, but their motivations made sense.  And you wanted them to be happy.  Kestrel is an example of what a YA heroine should be.  She’s tough, but not in the unrealistic type of way that chick in Defy  was.  She knew that she wasn’t going to be able to kick a 6’6 beefcake, she used other methods that made her seem way more of badass than if she could do a roundhouse kick.  She really was a master strategist and while there have been other characters in fiction that have been masters in strategy, you really don’t see that with female characters which is a shame.

The romance is how romance in books should be.  It’s an actual plot.  It’s not instant and is well paced. It’s classic.  We all don’t have to deal with a squirm inducing love triangle, which is refreshing.  The banter between these two characters really works and I like how their relationship is effect by the actual plot of the book.  Rather than having their relationship effect the plot.

The actual plot is interesting itself.  It’s a high concept where a Roman-esque type of empire has basically taken over the world.  The book is set in one of the places they colonized where they have taken over and the conquered have become slaves.

Honestly, when I read the summary I sort of just shrugged it off.  While seemingly original in YA, books where a romance develops between a master and his/her slave aren’t uncommon.  Look at Kathleen Woodiwiss’s romance novel, Shanna.  However, the world doesn’t stop with merely explaining our characters places in society.  It also adds to the overall plot of the story and is richly woven into the plot.

The political science minor in me really liked how these societal issues that Rutkoski set up in her world impact the the world on so many levels.  Not only the romantic relationship between the two characters, but the fate of these two groups of people is something you really want to read about too.

Slavery is a horrendous thing and I liked the way Rutoski handled it in the book.  She really gave a multi-dimensional look on it.  I liked how you got see how that aspect of society was viewed not only by Kestrel and Arin’s perspective, but you also sort of saw it with the minor characters as well.

I think one of the biggest strengths going for The Winner’s Curse was that it was put together beautifully.  The pacing on all aspects worked perfectly.  In addition to the romance being paced just right, the events that were going on in the empire played accordingly as well.  I liked how the author didn’t go the typical route and have a certain event that happened just a little over the halfway mark, happen at the end of this book.  Most trilogies I’ve read would’ve of probably paced it the predicted route, and I really think that would’ve hurt the book in a lot of ways.

If I had to really nitpick, the one thing I would pick on was the whole music aspect.  From the description of the book, you think it’s going to have a much larger role than it actually does.  While I was okay with it being sort of pushed to the back, I can see it maybe upsetting some people.  Honestly, I would’ve been just fine without Kestrel being a piano player, but I understand why that plot choice was used.

Other than that though, I can’t complain.  It’s getting a perfect ten from me and that is something I rarely if ever do (A+).