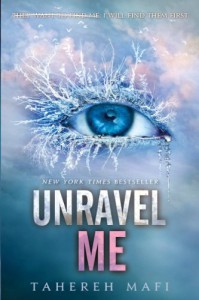 This is actually a fairly popular series.

I have lots of book blogging friends who love it.  I just…I just can’t.

I had this book on my shelf, but I just sort of put off reading it for a lot of reasons.  However, with the last book in the trilogy being released, I decided that I might as well get caught up.  And then I remember why, just why, I didn’t gobble this up when it first came out after reading the first two paragraphs of the very first chapter:

The big ball of yellow might be spilling into the clouds, runny and yolky and blurring into the bluest-sky, bright with cold hope and false promises about fond memories, real families, hearty breakfasts, stacks of pancakes drizzled in maple syrup sitting on a plate in a world that doesn’t exist anymore (Mafi, 1%).

Some people might find that quote endearing or the prose revolutionary, I don’t.  I just find it eye roll worthy.  Like something you’d see in an intro to fiction or intro to poetry class and you’d just try to find something nice to say you wouldn’t be hated by your classmate, but instead find yourself being the only so called bitch in your class for not seeing the beauty of using a breakfast food metaphor.

That’s what Mafi’s writing does to me.  It just makes my inner bitch want to get out a red pen and write–what the hell were you thinking?  If we cut all the breakfast food metaphor crap this would be a better book.  Same with using strike outs constantly, or not writing out numbers, or not using proper grammar rules, or the excessive use of repetition as a literary device.

The style of this particular series, really gets to me.

Maybe I could’ve tolerated it better if I actually liked the characters in this or book or there was an actual plot to this story.  But no, just no.

I’ll start with the plot.  It’s like someone watched one too many episodes of X-Men was obsessed with Joker/Harley on Batman the Animated Series as a kid, and decided to write a book with those concepts in mind.  But since dystopia is so prevalent in YA novels today they threw that in as well and….instant best seller.

The dystopian world that this series is set in is never really fleshed out, and at this point I never expect it to be fleshed out.  At the core of this book, it is all about the love triangle and what a shitty love triangle it is.

In corner one you have Adam Kent.  Kent.  Seriously, his last name is Kent.  Can we be more blatantly obvious that we we’re a comic fangirl trying to input our favorite heros into fiction?

Well, yeah…but I’ll get to that part in a book.

As far as comparisons to Clark Kent/Superman go, they look pretty much alike-dark hair and blue eyes.  And he has super powers, but at least he’s not an alien.  But wait he’s saving  I meant Juliette’s butt all the time.

Damn it, Mafi, you’re making me use strikeouts.

I don’t like using strikeouts. I find it so plebeian.

Adam is pretty much a bland other than having Superman looks, super powers and wanting to make out all the time with Juliette even though she’s like kryptonite to him.  Honestly, he’s borderline whiney and annoying.  In the last book he basically saved Juliette’s butt every chapter, but in this book that went to Warren.

Warren is probably the best character in this series.  At his best he is demented.  If I was to compare him to a comic character (which you can do with every character in this series) it would be the Joker.  He is just such a psychopath that you can’t help but enjoy watching him.  However, a lot of my Warren love was squashed by the fact that Mafi had to go out and romanticize him.

This character should not be romanticized.

He is a psychopath.  And while I know plenty of people ship him and Juliette I don’t get it, unless Mafi is going for a whole twisted Joker/Harley thing.  And even then, that relationship isn’t depicted as being one of warm and fuzzies, the creators showed that it was toxic.

But you’d never think that given how many descriptions of Warren’s emerald green eyes, blonde hair, and just how perfect he looks in his uniform that he’s a psycho. Oh, occasionally Juliette will mention he is and how she shouldn’t be falling over him.  But Mafi tries to compensate these mistakes of his by making him have a troubled childhood.

Oh, yes, the troubled childhood.  The excuse for everything.

Let’s see what can having a troubled childhood get you out of:

3) Being a mass murderer

And don’t forget if you’re nineteen years old that means you’re too young to be evil.

Do I need to even go there?

I’ll be honest, I liked Warren, not as a person, but as a character in the first book.  But the fact that Mafi has tried to pacify his actions so that he can become a legitimate love interest disgusts me on so many levels.

To be honest, I really could care less about who Juliette ends up with.  She’s a horrible character. I just cannot like her.  A part of me hopes she ends up with Warren because undoubtedly one day he’ll commit homicide against her and, well, I won’t have to read her whining anymore.

She essentially has Rogue from Xmen’s powers.  However, unlike Rouge she lacks heart, or any semblance of a personality.  All she does is lust or complain about her life.

And while some people call her on it, it’s done the wrong sort of way.  She essentially gets yelled at for being an introvert.  Apparently, if you don’t try to be overly social that’s a problem not being a whiney waste of space.

As an introvert, this offended me.  Sometimes people just don’t want to make friends.  And really, I think the compound should be glad that Juliette isn’t making more of an effort to get to know them.

I probably will eventually read Ignite Me since I made it this far and want to see if this series an possibly develop a plot in the last installment. I honestly, doubt it though.  It’s sad to say that even though Unravel Me suffers from a prose that is purple it makes purple lovers blanch and terrible characters.