Got to Love the Dress the Book Meh... 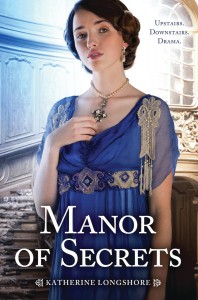 I imagine the creation for this book went like this (of course this is my imagination only and it probably really didn’t occur exactly this way-or at least I would hope):

Slimy Publishing Executive: You know what’s popular, Downton Abbey.  I think it would make a great YA book.

Helpless Editor: You think?  I mean, we have plenty of historicals listed in our catalog already.  I don’ think…

Slimy Publishing Executive: Good.  That will make plotting this one easier.  We’ll use some of the drama for those books and get someone to watch all of PBS’s Manor House  and bada bling bada boom we have a book.  Now who was that author who wrote all those books inspired by The Tudors.

Helpless Editor: Katherine Longshore?  I don’t know if she was exactly inspired by The Tudors.

Slimy Publishing Executive: Sure she was.   How else would anyone write about boring old history?  Now I want you to call Kathy and get a book deal written.  Make sure there’s a love triangle.  Two heroines with a major secret.  And tell her to get excessive with the descriptions concerning dresses.  Our readers love reading about dresses…

Okay, the conversation probably didn’t exactly go like that, but Katherine Longshore does have a number of books published about Tudor England–one of my favorite periods-and I can’t help wondering if she was inspired by that TV show.  Another thing I wonder is if those books felt as scripted as this particular endeavor does.

Because that’s what this book felt scripted.  There was no soul in it.  It seemed very packaged.  I can’t confirm that it was, but you know it’s a bad thing when you expect everything you’re get when you read a book. There was nothing surprising about this one.  It was just the same sort of drama you see in other YA historicals such as the Luxe series, but this time in Edwardian England.

The characters really didn’t even act that Edwardian-ish.

While the basics are there, I thought there wasn’t that big sense of class divide like you saw in Downton or other dramas concerning the period.

Sure, the servants in that particular house were treated horrible, but Longshore tried to make it seem like it was that house.

Nope, it was pretty much the norm.  If you ever watched Manor House you would’ve realized that.  Also, I thought servant life was considerably downplayed in this novel.  Like the position of hallboy, for instance.  It was the lowest  male position in the house.  The hallboy didn’t even get a bed.  And from what I’ve read/seen on TV, it was pretty uncommon for someone to just stick with being a hallboy for as long as Harry was.  Or let alone have as much respect.    And as for the whole plot with Janie apparently trying to better herself and become a lady’s maid from kitchen maid, probably wouldn’t happen.

It wasn’t that everything was historically inaccurate.  For the most part, I’d say the history aspects were taken care of unless you did a close, close analysis.  Though the history parts were glossed over that it was sort of hard to get the wrong for the most part.  For example, Longshore really doesn’t go into that much detail about upperclass life in the period.  Sure, we get an occasional description of a dress a whole stupid subplot of how the main character needs to marry but surprisingly that’s pretty much it.

One of the reasons I enjoy Downton Abbey is that it dives into the Edwardian world on all aspects.  While I get this is a book and you’re not going to get to actually see the manor, books still should be a better medium to explore the world than a TV show or movie.  Here not so much.

To call this book Downtown Abbey Lite would be an understatement.  It was more or less just your typical YA drama with Edwardian clothes thrown on it.  The story and the characters really didn’t even interest me because they were all so bland.

You have Charlotte who’s your typical I want more Disney princess.  Who really does nothing except get the servants into trouble and does stuff that almost causes her to die every other second.  I really didn’t like her or gave a flip about her for that matter.

Janine was a little bit better, but still had her own fair share of problems.  I really had issues with her reactions to some of the events that occurred in the book.  Seriously, the big reveal in the novel her reaction and her mother’s was anticlimactic and unrealistic-as I can tell you from personal experience.

To be fair to Manor of Secrets it isn’t totally God awful.  It has its moments.  The writing for the most part is decent and the book is fairly clean.  As I said, a younger teen might gobble this one up.  But it lacks depth.  It truly felt packaged.  It wasn’t the post season four Downton treat I wanted.