You Don't the Crown, I'll Take It 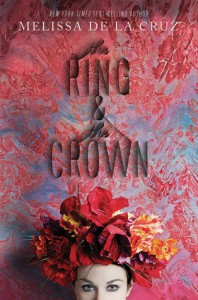 Childhood Dram Number One: Princesses.  Like a good chunk of little girls I wanted to be a princess when I grew up.  However, instead of any Disney fantasy kingdom I had my sights set on England.  Thank you, Kate Middleton for ruining that.

I so wanted this to happen, but without the horrible hair.

Childhood Dream Number Two: Soap Opera Writer.  Yes, I wanted to write soaps.  I think because you get paid to write ridiculous shit like having your dead boyfriend married to your long lost half sister and you only discover this at your family reunion.  Oh, and said reunion is at your long lost daddy’s palace (yeah, he’s a prince).

So, The Ring and the Crown sort of mixes these two childhood fantasies of mine and it sort of has mixed results. The good news is that it’s one of the better de la Cruz books I’ve read in awhile.  I mean, I had my dog review that disaster Frozen and you know when Patty reviews a book it’s kick a puppy worthy.  So, this was an improvement.  However, it still has a way  to go from her early Blue Bloods books.

So, what is our little soap opera about.  Well, de la Cruz has set up an alternate history where Merlin and magic is real (only to add some limited drama) and this has made Edwardian England  into some sort of soap opera world where everyone is beautiful and dressed like a Disney princess. Complete with Disney princesses smiles.  Save for the actual princess who we’re told is plain, plain, plain (probably because of all the inbreeding).

There’s about seven points of view to the story, which is very typical for de la Cruz (though usually she limits it to about three or four people).  This might bother some people, but this particular part of the story didn’t bother me since I’m used to her writing.  Though I have to say the many points of view did make me not care about some of the characters, particular Aewellyn who more or less was just there to info dump when needed.

Oh, and to preform the occasional spell.

For the most part though, the characters were formed enough for their soap opera roles.  Honestly, I was able to quickly figure out who was the Mimi, the Schulyer, and the Bliss in this story.  Though de la Cruz did switch up some aspects about their lives to make them original enough.  The plot twist in the book was the same way.  I saw it before in Blue Bloods.  In fact, it sort of made me roll my eyes since I’m sure Ron Carlivati could’ve wrote something better and more original on General Hospital even though there are certain individuals who call him Re-Ron.

I did enjoy this one though,  despite the predictability.  This book is what Melissa excels in.  Light, frothy fun with some fantasy maybe thrown in on occasion. The world building is not that deep and for the most part I was okay with it, though occasionally I might want a bone thrown at me.

Like all that info dumping that Mage Girl was doing at the end.  Seriously, why did that have to be rushed.  Couldn’t those actual scenes be written out?

This is actually a problem I had with the Blue Bloods series as well, way too much happened behind the scenes.  It’s a cop out de la Cruz that just doesn’t work for me.

Really, the whole book in a lot ways seemed half way done.  If fleshed out a little more, I think this really would’ve been a better book.  I wanted to know more about this world, how it worked,  and more about the Merlin.  Same with the characters and their relationships.  We knew who the characters were the sickly princess, the poor little rich girl who is in love with X but there’s another guy and well he looks like a Ken doll too.

Maybe this book was inspired by playing Barbies.  I swear there were so many pretty people…

And yeah, I keep going back to that.  Because it got so damn annoying hearing how pretty everyone was.  Did Eleanor win the war by being beautiful?  It certainly seems that way.

Though having wars decided based on looks might make an interesting dystopia…just saying.

Besides how everyone looked obnoxiously perfect, the other thing that made me cray-cray about this part was the names.  Dear lord, de la Cruz, I’d like to be able to pronounce half of the casts names.  It was bad enough when people were calling Schuyler Schooler for the first three books until you corrected them.  Do you really want to go through that again?  And I really don’t know how you expect me to find the name Gill sexy.  I mean, except if he’s on a long run CBS show and goes more or less by his last name.

However, bad names and pretty people, and plot holes aside.  I did enjoy this one.  It was fun for what it was worth.  I’m going to give this one a B-.  It had a lot going for it and hopefully it means de la Cruz is finally getting her groove back.  Which is expected because after Frozen, there was nowhere to go except up.