Pretty Sure She's Not the Master's Wife 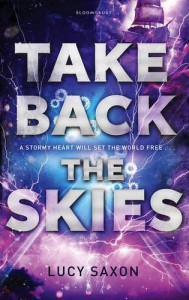 This book should’ve never been published.

Don’t get me wrong, I think Lucy Saxon (that has to be a pen-name) is very talented for her age, but she’s not ready for pub time (yet).

Though to her credit, she’s a bit more ready than Alexandra Adornetto.  But that’s really not a comment if you think about just how bad Halo was.

I always do love the gender bending trope.  And skyships.  Skyships sound interesting.  As well as revolutionary bad ass girl main characters.  The thing is, Take Back the Skies ended up being sort of a flop. On a lot of levels.  A part of me wants to blame Saxon’s age for these faux pas (after all, she was only sixteen when she wrote this book), but at the same time I’ve seen these same mistakes in author’s who are decades older.  So,since I’m in a generous mood (not really, I’ve just finally got used to not having coffee in the morning) I’m going to do the Master’s Wife a favor and dissect what’s wrong with this book.

1) Use your tropes effectively: I love the whole gender bending trope.  But it was over before it even begun.  I think the reason I love this trope so much is when used effectively it can show that a relationship is NOT shallow.  And God knows, how many YA relationships are shallow.  With a gender bending relationship, we actually get the benefit of having non-romantic feelings develop between the characters first.  Which is nice for a change.  Also, the reveal scenes can be hilarious if done correctly.  However, in Saxon’s case I think the reveal was a bit of a bore.  Or if I’m going to be more critical it made Fox look like an ass.  I mean, look at some of the things he said to Cat (see below quote).  And speaking of Cat, I didn’t know it was a unisexual name.

2) Pacing: Oh, Ms. Saxon, I think this is your biggest issue.  Pacing.  This book was horridly paced.  I appreciated that this is a standalone (or though I appreciated, since it turns out that there are going to be sequels), but come on.  All these problems couldn’t be resolved within the span of time you gave them (half a page).  I liked the plot you had, it really interested me.  But with everything being so quickly resolved my eyes almost popped out from all the rolling they were doing.

3) Your Romantic Lead: I have a feeling that there will be some Fox fans.  But I have to say,  he just didn’t do it for me.  And while I liked some aspects of the character all I have to say is… What a sexist jerk.  While Saxton did attempt to do some banter between the two characters, the banter was mostly Fox saying something sexist/Cat attempting to reason with him/and it ends with her walking away in a huff.   Which just left me…well, annoyed.

And speaking of sexism….

4) Learn what “sexism” means.  Seriously.  I liked the fact that the issue of sexism is brought up.  But please do make its full purpose for the sexual tension between the couple. It just gives me the feelings of total ick (see below quote).  Plus, the subject matter is such an issue that could’ve been expanded on more.  Other than Fox berating Cat because she’s a girl,  Cat is not limited by her gender.  Yes, she’s told she has to get married but all royal children (boy and girl)  are in arranged marriages.  She is not looked at by the crew (other than Fox) differently when they find out she’s a girl. The government does not treat girls differently than boys.

5) Expand On World Building: For a first book, the world building is okay.  Not great.  But okay.  Once again, if this novel was  a Creative writing project I probably would be giving it a lot of positive feedback, but it definitely reads work in progress.  I got a broad view of what was going on in the world that the Master’s wife (Sorry, I really can’t help myself) created. But there were a lot of blanks.  Like when did this book exactly take place?  A lot of it felt like it should be in the past, but the technology is way ahead.  So is it steampunk?  Or would it even qualify as steampunk because the world seems more fantastical.  In addition to the broad ambiguities, some of the decisions that the government officials make and the laws just didn’t make sense.  I mean, look at this example of how they deal with government tyranny.

A trial by proxy was only performed when the country itself didn’t have enough of an established legal system to perform a trial themselves, and had to call in foreign judges and jurors to conduct the trial for them.  She doubted there would be enough people left in government after the arrests to conduct a full trial. (321)

So essentially what I got from this is a trial by proxy is allowing another country to take away said country’s judicial system’s sovereignty.  What fucking country would willing do that?

Overall Rating:  If I’m  not looking at external factors, this is a pretty horrible book.  But if we’re looking at external factors, I do see hope.  Saxton’s book as flawed as it was, had potential.  And maybe with a couple of creative writing classes and age, some of the problems I had with Take Back the Skies will be remedied in future works.D+.  Not quite a failure because there’s hope.  But I wouldn’t recommend spending your money on this one, you’ll be disappointed.  Obvious library read.