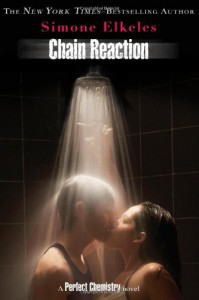 By this point you’d think that that asshole Carlos had probably whipped out any sort of sensibilities I might’ve had.  But even though I might make a joke about how reading these books could send a person into liver failure, I don’t actually drink when I read them.  I just don’t have enough money to pay the hospital bills and more importantly I have to sort of review them for you.  But if you thought Carlos was bad…well, Luis is just as bad as worse.

Well, it really depends, do you prefer out right in your face assholes or sneaky bastards.

If you hate sneaky bastards more than this book is really going to piss you off more than Rules of Attraction.

It’s also going to piss you off if you hate generalizations that fuel stereotypes.

With Rules of Attraction  I got annoyed with Elkeles’s little remarks about Mexican American culture, but compared to  Chain Reaction this was nothing.

The female lead, Nikki, is Latina.  Which should be instant points for Elkeles its not based on the poor generalizations the character occurs:

1) She must be saucy because she’s Latina.

She might claim she’s a full blooded American, but I’d bet my left nut she’s got some Mexican blood running through her feisty veins. (25)

2) She must know Spanish because she’s Latina.

3) Because  Nikki lives in a fairly affluent neighborhood, doesn’t know Spanish, and doesn’t know how to make tacos she’s dissing her heritage.

I wish I could say that despite the gross generalizations the rest of the book made up for this.  But it didn’t.

Oh, where do I begin?

Okay, I know what I’m going to do.  I know that she’s a fictional character, but I’m going to advise Nikki to seek out a divorce lawyer when she marries Luis because girl-he’s lying to you now and he’s not going to change his mind.

Seriously.  I mean, if you really wanted to get drunk you could just take a drink every time Luis did something semi-douchey to Nikki.

Actually, you’d probably be dead so that’s not a great idea.

But maybe if you divided it by lie….

So, how can you possibly get through this installment having a drinking game and not killing yourself.

Because every bothersome detail, it’s going to drive you crazy.

The good news is that this book is mercifully short.

Though I really wish Nikki would’ve kicked Luis’s ass to the curb. Or at least yell at Mama Fuentes for being a horrible mother (really, someone needed to do that).

Oh, and did I mention that there was a painful Lifetime message of not having sex before marriage thrown in there complete with an over the top life time event.

Don’t even bother with this one.  Your sanity will thank you.