Beneath the Slaughter House...I Know he's There 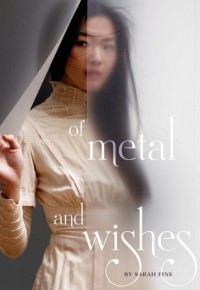 I was introduced to The Phantom of the Opera way back when I was in the second grade when I had a slightly obsessed Music Appreciation teacher who showed us all those old Sarah Brighton music videos that were made back in the day since Gerard Butler hadn’t made the movie version yet.

Given the fact that my music teacher had a very skewed version of the original source material…it took me years to realize that she was a Phantom fangirl and trying to impose on young impressionable mines a skewed version of what happened in the show..I’m not exactly one to talk about The Phantom of the Opera.  That being said though, Of Metal and Wishes takes a different approach to the storyline where Phantom lovers, haters, and people who have’t heard of the broadway show/the book  can enjoy this version.

I think one of the things that Fine did brilliantly was take the setting and turn it on top of its head.  The original iconically takes place in an opera house.  How can anything overtop an opera house.  Well, a slaughter house might just work.

Now I know those of you who are squeamish like yours truly are like a slaughter house, really?

It’s not that bad.

Okay, there are some scenes that will kind of have you grimace.  But the scenes are a necessity for the book.  And they surprisingly work without grossing out the reader (much).

In fact, I sort of liked how the setting was confined to the slaughter house.  I think that if we would’ve gotten a better view of the world outside the slaughter house the book would’ve been rated lower.  Most of the world building that is done is sort of murky.  There’s some vague sense that this book takes place in an dystopian version of an Asian country but that’s about it. As for the time period, I can’t tell you.  Sometimes I thought it took place maybe at the turn of the twentieth century while other times I wanted to say it was almost modern.

Luckily, these faults are overlooked because the slaughter house setting overtakes them as well as the well formed characters.

When I first started reading the book, I didn’t like Wen.  She seemed weak and annoying. To give her credit though, her mother had just died so I couldn’t hate her…that much. What I did enjoy about her was that she evolved as the story progressed.  You’d think that this would be something you’d commonly see in a book-character development-but surprisingly it isn’t.  And Wen’s character development is well…quite excellent.  It’s true that she doesn’t exactly become a BAMF at the end of the book, but I’m actually glad she doesn’t.  Her strength is quite and strong.  And it’s sort of refreshing to see this type of character in YA.

As for the other two leads, Bo and Melik, both of them are surprisingly well drawn as well.  I think what worked for me about these two characters was nothing about their relationship was instant love or friendship or really anything.  And that both were portrayed as gray characters (though one being slightly more deranged than the other).

Besides having great characters and a wonderful setting, Of Metal and Wishes discusses some mature themes such as racism, sexual harassment, and labor rights.  And it goes to (excuse the horrible pun) the meat of these issues.  As an adult reading YA I love this. There are parts of this book that are thought provoking.  Are some of the themes a little mature for younger teens…maybe.  However, I think it’s one of those books that’s good to talk about.

Overall, I really enjoyed this one and am green lighting reading the sequel even though I have probably a year to wait for it.  It’s a lovely book and I can forgive some of the murky world building.  If you like deep YA books and retelling, or even if you’re an ardent Phantom fangirl I recommend you give this one a try.