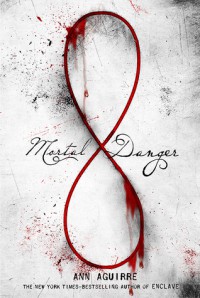 When I saw this book in the bookstore I immediately thought of She Devil.

This book is no She Devil though.  There’s no Roseanne Barr type character who gets revenge while not obsessing over her faults. What we get is a book with a very insecure main character who becomes instantly beautiful and confident at the same time.  While moments before, being suicidal.

Look, suicide is a huge deal.  And a complex subject matter that is impacted by a number of different factors.  I think what I found wrong with Aguirre’s book is what I find a lot wrong with the depiction of teen suicide in the media today.  They focus on one area and that’s it.  Yes, the bullying that Edie received in the book was heartbreaking, but I didn’t realize the extent of the bullying till the last half of the book.  Up to then, I thought it was standard high school garbage-i.e. Edie is not the most attractive girl in the world and is unfortunately picked on-the fact that the trauma that drove her to take such drastic was never really that addressed.  And for that matter, issues such as depression and other contributing factors that make one want to make such an awful choice  aren’t addressed in the book.  Just make my inner Book Hulk rage.

Seriously.  Magic Kian fixes Edie’s flaws with magic plastic surgery and she’s a-okay.  Gets a boyfriend with the snap of her fingers at camp.

So, moral of the story pretty people don’t have problems?

That’s how I really felt a lot of the time in this book.  Annoyed.  But it did have potential.

Besides, the whole insta beauty=insta self esteem boost, the other insta thing that bothered me…you guessed it Edie’s relationship with Kian.

Never was there a ship that I so didn’t get.

But Kian? He’s like the bland younger brother of Matt Bomer who has the creep vibe of Edward Cullen.

To be honest, I liked Edie a lot better when he disappeared for a hundred pages.  But when he reappeared, I still didn’t like him.  He did nothing but screw around with her and give her a creepy plastic surgery-ish makeover.

I mean, maybe it works for some people like in the Greek myth, Pygmalion, but I really don’t like the idea of having someone shaping your appearance into what you want.

Also, he totally got her into this mess that’s going to take her a trilogy to solve and he gave her no explanation whatsoever.

Despite my rants, I think Mortal Danger did have some neat ideas to offer.  Though to be honest, they weren’t very well thought out.  Maybe as the series progresses the world will feel more fully formed.  But as of now, the book really felt fragmented and the character often felt like they weren’t fleshed out.

Take the Big Bad, from the way he was described, he might as well had been in a Rankin Bass Christmas special as Frost Miser. Or Arnold’s pathetic version of Mr. Freeze.

Yeah, I wasn’t that scared since all I needed was a blow torch.

I have hopes that things will pick up though, and maybe that’s why I didn’t just outright flunk the book.  The end of the book makes the potential that the sequel might have intriguing.  And despite the major issues I have with Edie, I think she could grow into a likable character.  As for the ship though….me thinks not.

Kian you might look like Matt Bomer’s hotter younger brother, but that doesn’t mean you do anything for me with your Edward Cullen stalking and manipulating.

Overall Rating: C-/D+ there’s potential if you can squint, but you might want to hold off to see if the sequel improves things.