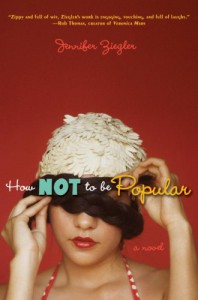 She’s not related to Patrick Dempsey if that’s what you’re wondering.  If she was, I might’ve liked Sugar Magnolia (Maggie) better.

If you want to really know how to be unpopular all you have to dress in an inconspicuous manner and have a desire to do something other than socialize (like read YA books).  Of course, you might get French Fries thrown at you in the school’s courtyard, but that’s another story for another time.

This book though tells you that the only way to be unpopular is to be a weirdo.  And that all unpopular kids are somehow mentally off in a way that meets none of the description in the DMS IV that I know of-I wasn’t a psych major though, so that might be the problem.  The point is, this book.  It just made me annoyed and angry and gave me a fucking migraine.

So let’s begin shall we before I get out the vodka and do something stupid.

Let’s start with the quote where I knew I was going to have to deal with extraordinary stupidity:

A tall guy is standing in the middle of the desks with his hands cupped around his mouth for better amplification.  He seems like a total Young Republican , with his pressed navy slacks and powder blue button-down.  His hair is neatly parted and combed, probably with some sort of mousse or gel in it.  He reminds me of the Mormon missionary kids Rosie and Les are always inviting inside for tea and a talk on the Bhagavad Gita. (19)

Well, at least he didn’t have blue eyes.

But this is the love interest, kids.  And I’m sorry but I don’t find Young Democrats or Republicans  or any Young Politicos sexy.  As for young Mormon missionaries, I don’t think they are really trying to look sexy when they’re doing mission work.  But if that floats your boat and you give the most cliche YA love interest name (Jack), well, then…

He’s swoon worthy.  You know, being the class suck up that tells everyone to shut up at the beginning of class.

I hated kids like that in school didn’t exactly lust over them.

Though, Maggie wasn’t that much of a princess either.

I have had comments that just hating characters aren’t enough to make someone hate a book, but I think if any of those individuals read this book they’d be agreeing with me that it can ruin a book.

Especially if it’s in first person.

This is it.  The perfect recipe for supreme dorkdom.  I’m in the school cafeteria, dressed like a color-blind geisha pulling food out of a Star Trek lunch box while sitting between my parents and across from Penny (145).

Save for the popular people in this school apparently and Penny and everyone else.

But I don’t see why?

Maggie’s stunts are just so cringe worthy that I had to put the book down several times to prevent my wall from getting dents in it.    You think flashing a guy with your undies is going to make him not like you.  It will make you a dumb ass sure…but since most guys like to get in girls pants I don’t think that this is exactly going to be guy repellent.

Then there’s the clothes.

Maggie’s unpopular clothes consists of things that you’d see out of Lola Nolan’s closet.  I’m serious.  It’s just some bizarre thrift mart wear.  That’s really not that bizarre, I was a creative writing major who had morning classes and whose building was frequented by the homeless-I saw some weird fashion shit.  I just don’t know why we had to have that scene with her parents coming to the school…well, I guess they had to come to show the kids how to do vagina exercises.

‘You know what else you should do for those infections?’ Rosie leans forward and her beads tap rhythmically against the tabletop. ‘ You should do vaginal exercises.’

I hear a choking sound in back of me as one of the giggly girls start hacking and coughing.  Turning toward the noise, I find all six of them red faced.  Five out of embarrassment, and one from lack of oxygen.

‘Someone your age really should practice these movements,” Rosie keeps on saying to Penny.  ‘All you girls should.” She turns to include the group behind us.  ‘It will aid urine flow and enhance pleasure during intercourse.’

I’m sure that the Young Republicans’ Old Republican parents are just going to love it.

But apparently, they did. Since nothing was said in the book about people complaining.

I get that it’s Austin, probably the most liberal of Texas cities, but it’s still Texas.  Even though, it’s weird.

I can’t make this stuff up.

Oh, but it gets better.

Get the popcorn, because this next part of my probably not that epic of a rant is going to be about Maggie’s new b.f.f: Penny.  And boy do a have a lot to say about Penny.

Let’s first talk about mental development issues.  I actually like YA books that explore characters who have a developmental disorders.  I think it adds a fresh perspective to YA.  Like in Isla and the Happily Ever After  I liked that the main character’s best friend had high functioning Autism.  Stephanie Perkins did a great job with the character Kurt.  She didn’t demean him or belittle  him.

Well, I don’t even know what the DSM IV would label her as.  I just know I felt so bad for this horribly betrayed character and whatever affliction that she might have I wanted to give her a hug.

Because truly someone could not be that annoying without suffering from something.

But the impression I got in the fifty percent that stomached my way through, is that there really is nothing wrong with her save for a leg issue and some asthma.

But I still couldn’t really like Penny even though I wanted to hug her?

I mean, would you like someone who talked about their snot production?

I get sinus headaches all the time.  I was born with very narrow nasal passages, so teh mucus gets trapped inside my forehead and becomes infected. (69)

I was hoping that at some point this book would bring out some sort of moral lesson, but other than rolling my eyes and being disgusted.  I learned nothing.  Maggie was a disgusting human being.  She’s falling in love with a tool that thinks it’s her fault she’s being sexually harassed, and she’s friends with a major dweeb.

Jack rakes his fingers through his sweaty hair.  ‘Look.  Just trust me on this,’ he continues, his voice barely audible.  ‘That guy is scum.  You don’t want to egg him on.’ (176)

And that would be perfectly okay (well, tolerable) if there were robots or something in this book to make it remotely entertaining.

But there are no fucking robots.

There’s not even one explosion.

There’s nothing but ew look at that hideous dress, I’ll wear it to be unpopular.  Yay!

Don’t bother guys.  A part of me thinks it’s even dirty to fail this book.  I think it’s best we pretend it doesn’t even exist.