The Bastardization of the Mediator Series 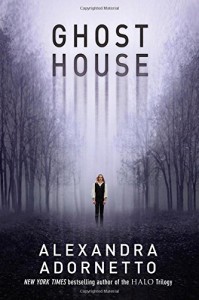 MJ: I think this is the year to fuck up with Meg Cabot series.  First the Princess Diaries series got fucked over by Royally Lost and now Alexandra Adornetto is bastardizing The Mediator series.

Why?  Alexandra Adornetto of all people?

What was Harlequin Teen thinking?  Maybe they recommend the series to Adornetto so that she could get a feeling of what a strong female character but…

You know what, I’ve done enough talking.  I think it’s time to take this review to today’s guest host.  I don’t own property rights to her or her handsome costar since I’m not the great Meg Cabot, but I do envy her sassy sense of dressing, her non-jerky not so dead boyfriend, and her penchant for headbutting ghost.  Give a hand to Ms. Susannah Simon.

Suze Simon: I thought this was suppose to be a lecture on how to ghost bust?

MJ: It’s actually more of a tutorial session.  I mean, you’re going to be teaching someone how to ghost bust.  Someone grossly incompetent.

Suze: I’m assuming that’s not you.

MJ: Obviously, not.  I’ve watched enough episodes of Ghost Adventures to know it’s a bad idea to provoke ghosts and run around like a girl.  And oh, static is so a spirit on the other side trying to talk to you.

Suze (rolls eyes): Reality television.  So, if I’m not here to teach you then who am I teaching?

Suze: Because it’s obvious that you read my story and didn’t listen to any of my advice.

Chloe: I found a boy in my haunted bedroom, didn’t I?  He has an accent and is British.  So, obviously that’s more exciting then your lame-o hot Spanish ghost in your bedroom.

Suze:  Um, my ghost lame.  No.  Resounding no.  Your boyfriend on the other hand, what a chauvinist pig.

Suze: There’s a difference between being old fashioned and chauvinist.  And your boyfriend (or insta crush since all you do is notice how good looking he is) is a pig.  Seriously, he says your friends are skanks and you’re totally okay with it?  Do you know what I’d do to Jesse if he did that?

Chloe: Um, not be friends with them anymore.

Suze: No, I’d tell him that he needed to get over it or we weren’t going to be together anymore.  And Jesse would get over it.  Because he’s just that type of guy.

Chloe: But…what sort of relationship is that when you argue and make compromise?

Suze: Argue?  I’m just asking him to respect my friends it’s what a decent person would do.  And I for one would never trash my friends behind their backs.

Chloe: Well, they are silly.

Suze: MJ, why am I here again?

MJ: To teach Chloe the trade of the ghost busting business so she won’t get killed.  Consider it community service.

Suze: Why can’t Slater do it?  He needs to do some community service.  I mean, he almost sent my boyfriend to hell multiple times.

MJ: Fine, Paul get your ass over here.

Suze: Unformed character who thinks pretty people=love.  Let’s talk Paul, what do we do when we have a rowdy ghost?  Do we moan and let other ghosts try to solve our problems?

Slater: Hell, no.  We exorcise the son of a bitch.

Slater: And you call yourself a shifter.

MJ: Actually, in this book guys it’s called medium.  Which is actually a fairly common term.  But you’re right in the fact that there seemed to be little to no rules when it came to the world building.  I mean, Chloe can just randomly do things like go back in time. Of course, she has a seizure during this which makes little to no sense but…

Slater: Going back to time is difficult.  It took us six books.  And it just didn’t happen random.  There’s a science behind it.

Slater: I’m sure you are, babe.

MJ: You’re too young for me.

Slater: Actually, I’m being aged up in a sequel so if you want my contact info…

MJ (blushes at her one bad boy literary crush): Um, yeah.  I mean, no.  I mean, yeah.  Just to do an interview of course.  Got to keep a blogger professionalism going.

Suze: Don’t fall for it.

MJ: I never said I was.  Though he’s going to be legal though and he is unattached.

Chloe: And Alex is legal.  And he’s perfect.  I knew as soon as I saw that golden hair, those blue eyes, that it was meant to be.  And he always saves me.  And doctors me up in his own old fashion…

Suze: What did you just say?

Chloe: I said he fixed my injuries..

Suze: You so got that out of my book.

Chloe: I bet Jesse didn’t ask you questions about why women read Cosmo?

Suze: Actually, he did.

Chloe: Danced when no one could see you?

Chloe: Had weird thoughts about having sex with a ghost?

Slater: Ew, Suze, ew.  And as for you, did you too do anything original?  I mean, Simon and Rico Suave and pretty vanilla when it comes to the romance department, but they did have a bit of a werido relationship that’s only theirs to create.  I mean, couldn’t you do something like…go on a picnic on the moors?

Chloe: But what would we eat?

Slater: Picnics aren’t all about food, Chloe, if you know what I mean.  Hey, MJ, picnic?

Suze: You leave her alone.

Slater: No, way Simon. But you know, you really could’ve done more to show off England.  I get it rains all the time and according to you the food sucks, and it’s all about Prince Harry.  But there’s really more to that country.

Suze: Like a thousand plus years of history.  You could do a better job showing said history. Have some anglo-Saxon ghosts.  But of course you get your boring Heathcliff wannabe.  Well, he’s probably not a Heathcliff wannabe since he doesn’t kill puppies.

Slater: Was that really necessary, Simon?

Suze: You can’t ignore details when it comes to ghosts, Paul.  You know that.

Slater: True.  But they were living the moment.

Suze: Yeah, until his ‘evil’ ex girlfriend or dead girlfriend since they didn’t actually break up was in there.

Slater: Don’t be too hard on her, Maria was a bitch too.  Remember?

Suze: But that was different, I didn’t blame Maria for all her mistakes.  Diego  was just as responsible for putting Jesse in the ground.  Isabelle did nothing but  cheat on her husband with Alex.  But instead of Alex getting any of the blame, it’s all Isabelle’s fault that every thing went to shit.  Also, I love how she appears this decomposing monster and he looks like a supermodel.

Slater: I personally, thought de Silva had a maggot in his nose.  The evil ones are always ugly.

Suze: Yes, just look at yourself in the mirror.  But seriously, there’s nothing in the world that tells why Isabelle looks the way she does while Alex looks perfect.

Suze: Whatever. And your medium powers.  Just randomly come up.   Aided by supposed paranormal investigators who have no respect for your privacy.

Slater: I so would’ve exorcised them.

Chloe: They were just trying to help.

Suze: They almost killed you.  You lack common sense.

Chloe: So, what am I suppose to do then?  I mean, really?

MJ: That’s a hard one for me to answer.  I mean, I really don’t have much control over your future Chloe.  And neither do Suze and Paul.

Chloe: Then why are we staging this intervention?  It was just for you to hook up with a fictional character, wasn’t it?

MJ: Um, no.  But that was a perk.  Actually, it was to point out the flaws of this book.  And how eerily similar it was to The Mediator series.  Which you’d think would be a great thing, since that series is probably one of the best paranormal YA series out there.  The thing is, even though it’s a blatant ripoff, it still reeks of Alexandra Adornetto’s signature faux pas regarding misogynic  views  and insta love.  Though, I will give Ally’s new editors this, they cut a lot of the purple prose out.  Oh, it’s still there.  But it’s much more bearable now.

Chloe: So, this has no purpose?  Other than to show what a flop of a character I am.

Slater: OOh, burn.  MJ, totally taking you out to dinner  for that.

Suze: This flirting is just getting sick now.

Suze: Yeah, well, good luck, Chloe.  You’re going to need it.  You seem incompetent about ghosts, in a world that’s building is pretty much a house of cards.  Also, if you stay with the chauvinist your never going to grow as a person.  Especially since he’s dead.

Chloe: Well, you got with a dead guy.

Suze: Used to be dead.  And on that note, I got to go seventh book and all and I really don’t want to be around those two-wait, did they already leave( looks out the window and sees MJ and Slater getting into Slater’s Porsche obviously to do something non-book related).   Ew!

Chloe: This is going to be me sitting here all by myself isn’t it?

Chloe( frowns as the ghost gets clearer): NO!  NO!  NO! I don’t want to end up you.  I don’t want to have sex for the first time with alligators and be obsessed with a boy with nut color hair.

Bethany: But don’t you love Alex.  Aren’t his eyes so blue.

Chloe: Do they have any vodka around here?

Bethany (looks at Chloe aghast): You’re underage that would make us a drunk harlot.

Chloe (grabs MJ’s vodka): Oh, screw you.  If I’m going to be like you at least I can be drunk throughout the entire process. And it’s totally legal in the UK, dumb bunny.  Even I know that and I didn’t realize that 911 was different there.

Overall Rating: I’m giving it a D.  Adornetto has improved technically, I’ll give her that, but her handling of character development and sensitive subject matters still sucks.  While this won’t quite offend so many people as her Halo trilogy did, it’s still going to get people like me drunk and into the convertible of a former YA bad boy who turns out to be quite the good kisser even if he’s a bit slimy.